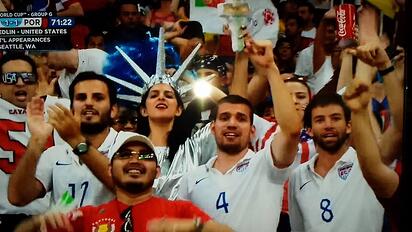 I am proud to say that I was a part of the World Cup this year as a spectator and fortunate enough to garner some TV time with Miss Liberty (that’s me, wearing No. 4), during the USA vs Portugal Match. I think these moments of coming together are necessary for us to consider our fellow humans living far from us, in situations nothing like our own. I had the chance to interact with people from nearly everywhere, and broadcasts reach every nation as well. I believe that more and more people will tune in for these truly international events as technology becomes even more widely disseminated, as the world gets seemingly smaller.

At Liberty Packaging, and the Intercept Technology Group, we are vigilant of the fact that the world is getting smaller and more connected. But we also take time to savor moments like these where we shift our focus from the distance between us to how close we really are to our worldwide neighbors.

We hope that you have taken time to savor this special cultural event of world class soccer and bear witness to the moments of togetherness that we can share with even our most far flung neighbors.

Written (and lived) by Albert Greenhut (No. 4) of Engineered Materials, Inc. For more of Mr. Greenhut's writing, please visit: Inside Static Intercept