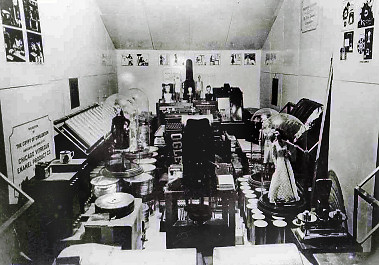 Under seven feet of stone, in the foundation of Phoebe Hearst Memorial Hall, lies a small pool-sized room filled with all of humanity's knowledge prior to 1940.  The room is sealed shut with a welded stainless steel door which is not to be opened until 8113 A.D.  This room is the Crypt of Civilization.

We continue our coverage of the Boston Time Capsule with updates from our recent visit to the Museum of Fine Arts, exhibit showing what was discovered inside the second Capsule recovered. The interest in this Time Capsule has been highly documented by many world news organizations because two well-known American patriots, Paul Revere and Sam Adams, were involved. Photos we were allowed to take are shown below.