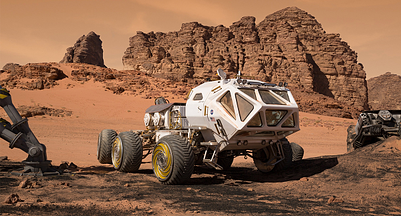 The story started as a blog where the writer, Andy Weir (a computer scientist and self-described space nerd), decided to write the blog from the point of view of astronaut Mark Watney, trapped on Mars after his fellow astronauts have to abort a mission and leave, believing Watney is dead. This blog created a following, turned into an e-book where it topped Amazon’s bestselling science fiction list, then turned into a published book in March 2013, was optioned as a script as well, and is now a big-budget and star-studded film, after having also been on the New York Times best seller list in March 2014. What a ride already!

The main character, Mark Watney, faces challenges not in opposing characters, but in extraordinary conditions that are based, accurately, on actual problems we foresee about human exploration (or colonization) of Mars. Put simply, he is on another planet and must survive, and we get a front row seat to see how he tries to and what obstacles he must overcome. The forces against which he is fighting in The Martian have been praised for being very accurate.

At Intercept Technology we work to prevent corrosion and degradation due to atmospheric pollutants. I know you may be thinking that Mars is the “rust planet”, which is true based on its color because of iron oxide dust covering its surface, although its atmosphere now lacks water and oxygen necessary to create rust. (Theories support the idea that there was once both water and oxygen present on the surface of Mars, but I won’t go into those now.) We also provide a product, Static Intercept, which protects sensitive products like computer chips from static discharge during production, transportation, and storage. This product would be very useful on the surface of Mars as the atmosphere and fine particulates that cover the surface build up static energy. In fact, Static Intercept is extremely useful to aerospace parts manufacturers and companies building machinery that will go into outer space.

Mark Watney, played by Matt Damon, faces his share of challenges while fighting to survive. Simple things like food, water, oxygen, and gravity come into play on Mars, and through this character’s eyes, we have the pleasure of seeing how such an amazing adventure might turn out.