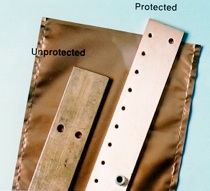 For a battery it is clear that galvanic corrosion not only makes it work, but is also what kills it. However, in almost every other real world situation, the action of galvanic corrosion is strictly detrimental, so it is definitely best to try to avoid it. Of course, this does beg the question of how much electrolyte is available outside of a battery to create enough potential to destroy these metals. The answer, as it turns out, is quite a bit.  All that is needed for an electrolyte is moisture and ions. Moisture is everywhere. Relative humidity can change quite quickly, especially locally or in small spaces which can create droplets on surfaces in unexpected places. Ions are also incredibly abundant, specifically the chloride ion, which makes up a surprisingly large percentage of seawater, and can outgas from water into air. Sulfide ions from pollution also pose a large threat, not only to our health, but also to the metals in the important machines and technology we use.

In almost every real world situation, the action of galvanic corrosion is strictly detrimental, so it is definitely best to try to avoid it.

So with electrolyte all around us, we need to know where different kinds of metals are in contact with each other.  Certainly this does happen in large structures, like bridges and ship hulls, which need to be protected by method of sacrificial anode or impressed current, to try to cancel out the current from the circuit made by the metals and electrolyte. But the increasing delicacy of electronics means that galvanic corrosion poses a particularly important threat to the functioning of the world’s most important machines. Electronics almost always have connections between different metals, and even different alloys of the same metal, which also have different nobilities. Certain parts of electronics, like switches, are so prone to corrosion that manufacturers have been plating connectors with gold, which is both one of the best conductors and one of the most noble metals. This is a step in the right direction for protection of electronics, albeit a somewhat expensive one. But not everything can be gold plated because of the galvanic reaction between gold and the less noble metals, like silver, copper, and tin, which make up the bulk of the metal in electronics. Also when the coverage of the plating is not complete, or somehow gets damaged, the ensuing galvanic corrosion is worse than without the gold because of gold’s exceptionally high nobility.

There are several other solutions for slowing the action of galvanic corrosion -- see our post about corrosion control for more specifics -- but the main point here is that not only is galvanic corrosion difficult to avoid (Engineers could try using only one metal for everything, but that would quickly exhaust the resources of that metal, and, more importantly, the specific attributes of each metal are what make them useful in certain situations. This is probably most obvious from the fact that the human body requires some metals and not others. You may not know that you have a rather small amount of chromium in your body (about 0.0000024% of your mass), without which you would not survive.  You also probably have a slightly larger amount of titanium in there, but your body could give or take that superficially similar metal), but the action is also sometimes useful. If somehow scientists figured out a way to universally end galvanic corrosion, the battery industry would take a nose dive, and you would have to figure out some other way to start your car in the morning.

More from our series on electronics corrosion, pitting corrosion, and the more specific topic of aluminum corrosion.