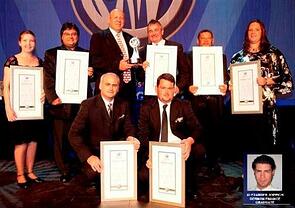 Being involved in sports since childhood, the concept or reality of prizes and awards has been a constant over the years. Even in this politically correct age, where everyone needs to receive a ribbon for every attempt, some prizes still retain their value and worth. Prizes in sports follow the same theory as Olympic medals, (though with less fanfare and certainly with a lower precious metal content) which is to celebrate and recognize hard work, perseverance, and most importantly to represent and honor achievement and performance.

Though prizes in the field of packaging are less publicly acknowledged, they are still significant. Digging into this thought I found that Intercept Technology™ Packaging is not without its share of awards. The most recent awards we received were from the Hungarian Packaging Exposition, one of which was for providing the Shrink Wrapping of a mono-rail train going from Hungary to Nigeria. We combined physical protection for the train components (during the train’s intercontinental odyssey) with the capability for long term storage for the components during and after construction, without the use of any volatiles; to keep the system clean, green, and completely environmentally friendly.

Another award that we are most proud of is one from the German Government. It states that Intercept is their Environmentally Preferred Anti-Corrosion Protection Packaging. We followed that up by helping VW of Port Elizabeth, South Africa, win two environmental awards in 2009. In the USA, NIPHLE (National Institute of Packaging, Handling, and Logistical Engineers) awarded us a design prize for creating a liner to facilitate the shipping of armor-plated Humvees to Kuwait and then a return shipment of the cabs, without armor plates, back to the U.S. in the same container (in one fell swoop protecting Humvees and re-using the same shipping supplies to send back the crates and the cabs that needed to be reworked). With these awards, it appears that we have a theme.

One of my favorite orators, Theodore Roosevelt, in his speech at the Sorbonne in 1910, spoke of a warning about complacency in how you view the rewards of actions, “But we must not transfer our admiration to the reward instead of the deed rewarded”. He used the example of a rich man. Many times the common perception is to envy the man because he is rich. Roosevelt warns that instead of honoring him because he is rich we should admire him because he has provided a valuable service to his fellow man, and the wealth is just a fortunate side effect.

Our main aim, with Intercept packaging as our tool, was to do our job. A secondary form of honor was the service to the end users, and the recognition was the much-appreciated icing on the cake. The secondary honor I am referring to was the utility found by the common users of the train. If you have ever been to Nigeria (Lagos in particular) you probably have found that you (and all of the surrounding people) were confined to cars as the only means of transportation. For a visitor, there is little alternative to taxis. We are proud to be a part of the development of a new way for Nigerians to embrace public transport, rather than the daily hassle of gridlock.

We are proud to do our jobs in a way that provides a needed service in the lives of others, and we believe Theodore Roosevelt would agree, that it is a deed worthy of recognition.

...from the files of Keith Donaldson of Engineered Materials, Inc.