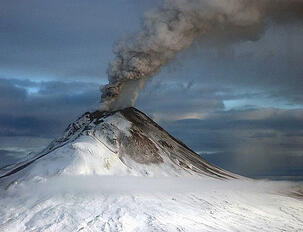 “moderate volcanic eruptions are the main drivers of stratospheric aerosol variability from 2000 to 2010….” . - University of Colorado study, from an IEEE Magazine article

In China and other newly industrialized countries, it’s not the carbon dioxide (CO2; the focus of most climatologists) that is most rampant. Based on a study from the University of Colorado in collaboration with geophysicists from the U.S. National Oceanic and Atmospheric Administration, MIT, and NASA, the atmospheric gas which is more prevalent and is a serious threat to health, and in Liberty Packaging’s field of corrosion prevention in shipping and storing, is sulfur dioxide (SO2).  SO2 is released from coal burning, volcanos, and fires. To keep pace with its industrial progress, China continues to build coal-burning energy plants. The problem is that only 30% of the coal burned is for energy; the majority of coal burned is used for home heating among their citizens, who do not have environmental controls like scrubbers and filters. As a result, the atmospheric pollution in China is getting worse.

The U Colorado study shows that even with China and India going through their industrial revolutions spewing tremendous amounts of sulfur dioxide (those countries have increased their SO2 emissions by 60% in the last decade) into the atmosphere, the amount of manmade climate changes based on formulas from researchers, amounts to only 4% in five years compare to 4%-10% yearly since 2000. Which means that the vast majority of sulfur dioxide emissions are released through naturally occurring events such as from a volcano or fires. In fact, their simulations also indicate that the sulfur dioxide blasted into the upper atmosphere exerts a significant global-cooling influence, in effect canceling out about 25 percent of the worldwide warming that would otherwise have resulted from the accumulation of carbon dioxide and other greenhouse gases.

The study states that the major problem with SO2 is the immediate pollution. “While the gas blunts the impact of climate change a bit, a lot of manmade sulfuric-acid-to-be spews into the lower atmosphere, causing damaging acid rains that poison lakes and rivers, kill trees, and even eat away at limestone and sandstone buildings” and degrading your shipped or stored products.

Our Intercept Technology packaging plastics act like a skin around your product, reacting with and neutralizing these gases, including SO2, keeping your hard-earned product safe.